Recently, Capital One hosted an evening with Dr. Stephen Mansfield, author and speaker. Dr. Mansfield discussed the topic of how leaders can lead through crisis to an audience of entrepreneurs, businesses, and community leaders.
Churchill was used an example of a leader who learned and leveraged key communication principles of branding to lead through crisis. I found the discussion both fascinating and educational, and I wanted to share Dr. Mansfield’s “Nine Pillars of Churchill’s Crisis Leadership” because they also happen to be key elements of a powerful brand.

For this blog, I have focused on the following two pillars for deeper
consideration: Invoke Destiny and Define Victory.

Invoke Destiny: Purpose-driven Millennials Are Inspired
Dr. Mansfield shared stories about Churchill, including how Churchill loved to invoke the vision of something greater than ourselves; Dr. Mansfield called this pillar, “Invoke Destiny.” When people were given a role or a purpose-driven job, they would be more productive because of the opportunity to create a large
impact.

In a recent PEW report researchers found that 73% of millenials do volunteer work, demonstrating their sense of the greater good and purpose. This statistic just illustrates that when people are given purpose-driven challenges, they are inspired to accomplish great tasks.

Define Victory: Churchill Connects With Emotion (And, So Do Great
Brands)

Dr. Mansfield shared stories about how Churchill communicated during the war.  I found it amazing how much raw emotion and careful communication Churchill leveraged.  Churchill would review communications before they went out to the field to make sure that the commands connected with the soldiers. For example, instead of saying, “defend your accommodation units”, he would update the orders to say, “defend your homes”. Although this improvement in wording may seem obvious, Churchill took the time and consideration to ensure that his messages connected to the emotion of his soldiers.  If he had not managed
the messages and changed them, the impact would have been far less.

Churchill was a fascinating leader who led through actions and words. Whether reviewing every order and editing it before it went out or standing on the tops of
buildings to shout at the Nazis (demonstrating courage to Churchill’s countryman).
Churchill over-delivered through his actions and words, and he was able to
leverage branding principles throughout his leadership.

We all have to make decisions, and Churchill’s pillars of leadership are a great
place to start when working towards creating a strong brand. 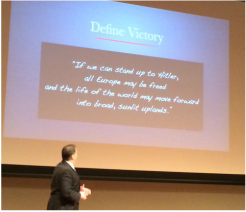 Jen Dalton is a personal brand specialist with entrepreneurship in her DNA. She helps business owners and executives define how they show up as leaders, make the most of their strengths, and tend to their legacy, growth, and visibility. The author of two books, frequent speaker, podcaster and “Purpose Sherpa,” Jen is a critical resource for any person or company that wants to define their brand and differentiate themselves in authentic, credible, and relevant ways to the market.